Q: How do you access the mounting screws on the side of the ports? Is there a way to power on the Mac mini through the unit?

A:  The following web-link will direct you to a video that tells the users how to set up the NA338TB3 with the Mac mini computer. In the video, it shows how to remove the screws; also, it gives directions on how to power on the Mac mini through the unit: https://www.youtube.com/watch?v=ochm2fHyG3k

Mac mini (Late 2018) and previous Mac mini models are compatible with the NA338TB3.

Q: Can an Apple bi-directional Thunderbolt 2 to 3 adapter be used to connect the NA611TB3 to TB2 port on a late 2013 Mac pro? Will the speed decrease?

One only use Apple’s Thunderbolt 3 to Thunderbolt 2 Adapter in this setup because only Apple’s TB3 to TB2 adapters bidirectionally supports TB2 (host) to TB3 (device).

A: Within the NS372TB3 enclosure, it utilizes an ATTO ExpressSAS H644 host bus adapter to connect with the 5.25” half-height LTO tape drives.

A: Please see the following for the suggested cards arrangement in both Mac Pro and NA250A-GPU. Since you are using GTX 780 and TITAN X for CUDA processing, we would suggest you to visit http://www.nvidia.com/object/mac-driver-archive.html and download/ install the latest Mac CUDA driver for the two GPU cards that working with Mac OS X 10.11.5. [Last update July 1, 2016] 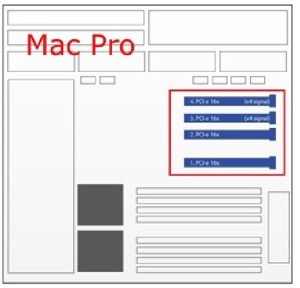 Q: We specialize in Forensic Computers for the Military and law enforcement and is currently looking to purchase the NA255A-XGPU. The followings are the PC specs and requirements:

Please help to verify if the NA255A-XGPU is able to support 4 x GTX 980 or 4 x GTX1080 simultaneously with the computer specs provided. Besides, if it is possible to get an upgrade to 1500W power supply instead of 1200W, or can we purchase without a power supply?

A: For your reference, we had provided a real case with a similar scenario as yours:

We have confirmed the above setup from the customer is workable. However, you mentioned the CPU you used for the Asus X99-E WS/USB 3.1 motherboard is i7-5820K. But from our success case, the CPU used on Asus X99-E WS is a higher end model of i7-5960X.

Furthermore, your RAM for Asus X99-E WS/USB 3.1 motherboard is 32GB DDR4, but, from our success case the RAM is 64GB DDR4. The size of RAM on the motherboard may also have an influence on the number of GPU cards workable with motherboard.

Therefore, four GTX 980 GPU cards in NA255A should also work with your Asus X99-E WS/USB 3.1 motherboard. But most importantly, the CPU model and size of RAM must be considered since the i7-5820K CPU only has 28 lanes and motherboard only has 32GB in size.

As we mentioned, the ASUS X99-E WS can support up to 4 GPUs; however, the Z10PE-D8 WS can only recognize up to 2 GPUs. We suggest to choose the GTX-1080 because this GPU requires less power and offers better performance.

Currently we don’t have the 1500W power supply option available. And due to its elaborate design, we don’t recommend using any different power supply other than the one included in the case. [Last update July 8, 2016]

Q: We currently have an old Mac Tower(No thunderbolt), and we are looking to expand PCIe slots for Pro Tools HDX cards. Need PCIe-expansion that is quiet, low fan noise. Can NA211A-GPU meet this need? Is this item still available?

Q: I’m interested in purchasing the NA211A-GPU PCIe expansion chassis for my 2009 Mac Pro computer. I need it specifically for the DaVinci Resolve software, which relies heavily on GPU Cuda core processing. I plan to use the chassis for a second processing card, as well as a Red Rocket card. Is there any reason why the expansion chassis would not work with Resolve?

Please take note that either one of the following combinations of PCIe cards would work in the NA211A-GPU.

We would recommend the NA250A-GPU (/product/pcie-expansion-enclosure-na250a/) should you need to install two or more PCIe x16 cards at the same time. [Last update May 23, 2016]

Q: How to convert the NA211A to Thunderbolt PCIe expansion enclosure, NA211TB?

Yes, NA265A can hold four (4) double-wide PCIe, graphics, or FPGA accelerator cards; in other words, four double-wide cards can be installed within the NA265A enclosure for work.

On the NP952AG3 backplane within the NA265A enclosure, SLOT 2, SLOT 3, SLOT 4, and SLOT 5 are the downstream PCIe slots for the users to install the third-party PCIe card and GPU (graphics) card. The SLOT 2, SLOT 3, SLOT 4, and SLOT 5 are physically in x16 form factor, and each slot among SLOT 2 ~ SLOT 5 is x8 signal. You can get this information by visiting the following webpage:

Click on the Specs tab, and on the item of No. of Slot, it has indicated so.

The performance difference is only around 1% when GPU/PCIe card is installed in between PCIe 3.0 x16 slot and PCIe 3.0 x8 slot as shown in the following test results conducted by the professionals. [Last update March 17, 2019]

Q: The description states that PCIe 3.0 x4 slots will be available when upstream port working under PCIe 3.0 x8 mode. Does this mean that if I am running at PCI-e 3.0 16x mode I will not have access to the PCIe x4 connectors?

A: If the upstream is running under PCIe 3.0 x16 mode then the two PCIe x4 connectors will not be available. The maximum bandwidth that host interface can support is up to 128 Gbps external PCIe 3.0 x16 between host and NA265A. [Last update April 16, 2013]

Q: For our holographic products, I’m interested in using your product for hosting multiple GPUs outside of a host PC box, but I’d also like to use your Host Adapter card to connect a custom external backplane or FPGA to a host PC. Is that possible?

I’m essentially looking for the fastest way I get data off of a GPU and into an externally located FPGA. It seems to me that your Host Adapter would do the trick. However for the particular application I have in mind, the NA255A-GPU box is not required. I would rather connect your Host Adapter card directly to my FPGA via the external PCI-e cable OR I could create a custom backplane that my FPGA card sits in. In this case, I would just need to know how the Host Adapter interacts with the upstream port. Or another possibility would be whether you manufacture smaller backplanes than the one in the NA255A-GPU chassis.

A: Our pin assignment for the upstream port and the Host Adapter are following the standard specs from the PCI associate as shown onhttp://www.pcisig.com/home.
I believe you are referring to the application as the following image and the example at (http://www.dinigroup.com/new/DN2076k10.php). We also have a smaller 3 slots board that is available in PCIe 2.0 version only. [Last update Jan 3, 2013]

Q: I’m looking to use NA255A-GPU for heavy multi-GPU computational purposes. Is the Host Adapter PCIe card that plugs into the host PC a simple “data pass through” layer? Does it add any additional latency when transferring large amounts of data between GPUs and host system memory? Is the upstream port slot inside of the NA255A box a special slot? Or is it a standard PCI-E slot? If I were to connect the Host Adapter card to a custom backplane not manufactured by you guys, say a backplane with a custom FPGA, does that custom backplane and FPGA still get recognized by the Host PC’s bios? I only ask because:

2. We have custom FPGAs and backplanes with both our static and dynamic holographic display products. We currently connect to these using much lower bandwidth protocols (ex: ethernet and USB). I’m curious if it would be possible to use your Host Adapter card to connect directly to our custom FGPA cards or backplanes so they are directly accessible to the host PC.

Q: What is the bandwidth provided when TurboBox NA210A is connected with a laptop or a desktop PC?

Q: How do I know the third party PCIe cards plugged on TurboBox NA210A are recognized by computer?

Q: After I connect the TurboBox NA210A to laptop/desktop PC, the TurboBox can not be recognized by computer. What can I do to solve this problem?

Q: Wondering if your Model# NA210A can support a KONA 3 and/or Red Rocket card(s)? I want to use this with a MacBook Pro.

A: Only MacBook Pro(Unibody Model ID 5,1) has problem on its ExpressCard interface compatibility; others models of MacBook Pro are working well with NA210A.
The spec. of Red Rocket card(s) is no problem working with NA210A but the spec. of KONA seems to ask for PCIe x4 bandwidth. Since Laptop is only provide PCIe x1 bandwidth so when KONA 3 works with a Laptop then I suppose it cannot reach full performance. SD will work but I cannot make sure on HD. [Last update Jan 24, 2011]

A: Yes, NA210A is no problem working both Video and Audio cards and the bandwidth from DT will be fairly enough for handle those two cards together. UAD’s engineer has tested NA210A with their 2pcs of UAD-2 Duo and the result is workin well. UAS will announce this news after they finish their big project of new products. [Last update Jan 26, 2011]

Q: What is the bandwidth provided when NA220A is connected with a laptop or a desktop PC?

Q: Does the NA220A support the: UAD-2 QUAD DSP Accelerator?